“Nothing goes wrong in a straight line.” This is how functional markets adapt to a new reality: higher inflation, rates.

By Wolf Richter for WOLF STREET.

There was a lot of talk and hesitation and the Fed kingpin fantasized about the 10-year Treasury yield falling from 4.25% at the end of October to 3.51% at the close on Friday. That’s a drop of 74 basis points. As a percentage, the return fell 17%. A decline in yield means a rise in the prices of these securities. This fall in yields therefore represents a rally in prices. 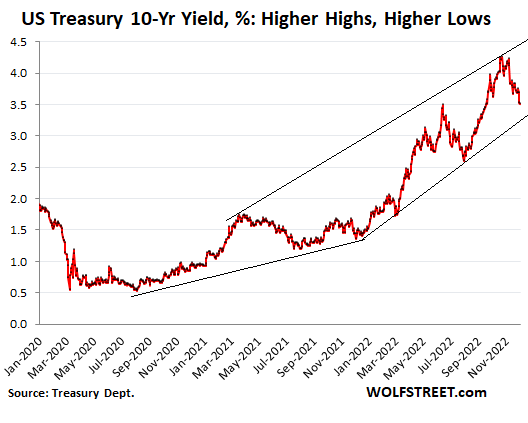 In August 2020, the 10-year yield hit a low of 0.52% – after months of widespread propaganda by bond and hedge fund kings and queens and gurus on social media, on CNBC and Bloomberg that the Fed would push interest rates into the negative, just as central banks had done in Europe and Japan.

This was an effort to manipulate people into buying a 10-year stock with almost no yield, thereby driving yields further down and prices still higher, to make a lot of money for said kings, queens and gurus.

Whoever ended up buying 10-year maturities at the time had a very bad deal because it marked the bottom of the 39-year bond bull market, during which the 10-year yield had risen from 15.8 % in September 1981 to 0.52% in August. 2020 – not in a straight line – on falling inflation and falling interest rates, with some big swings in between, and since 2008 fueled by money printing and interest rate repression .

And then, as the Fed ended QE, then hiked rates, then embarked on QT, mortgage rates surged – interrupted by big bear market rallies, most notably the bear market rally in he summer when the average 30-year fixed mortgage rate fell 14%, from 5.8% to 4.99%, only to recover to 7.08% at the end of October. According to the Freddie Mac Index released on Dec. 1, the rate retraced some of that rise, dropping to 6.49%. This represents an 8.3% drop in average mortgage rates.

Since the beginning of 2021, we still have an uninterrupted uptrend in the 30-year fixed mortgage rate, marked by higher highs and lower lows, and a further drop would fit well into the overall uptrend: 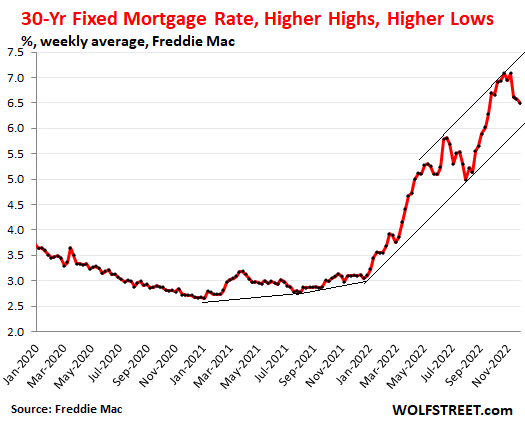 The trend is your friend. There has been a tremendous amount of Fed pivot haggling and rate cut haggling and the Fed haggling will soon restart QE etc. This is all part of the normal game of how markets adapt to new realities, with each side pushing in its own direction, thus pushing markets up and down in a volatile fashion. But this is how functional markets adapt to new realities. Adjustments don’t happen all at once. And if they do, it’s a really scary deal. And they don’t adjust in predictable straight lines either. They get at it over time in their rough and rambunctious way, but eventually, they get there.

Do you like to read WOLF STREET and want to support it? You can donate. I greatly appreciate it. Click on the mug of beer and iced tea to find out how:

Would you like to be notified by e-mail when WOLF STREET publishes a new article? Register here.